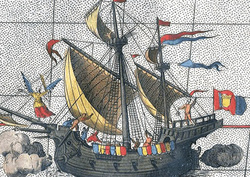 Officially, a tiny Spanish sponsored fleet made the first important contact with the New World.  Earlier contact, such as the ones made by Leif Erikson, are historically only footnotes.  The ships led by the enigmatic Christopher Columbus landed somewhere in the Carribean Island.  According to the National Geographic Society, he made a beachhead on the present day island of St. John.  Wherever he landed, the impact of this "discovery" was perhaps the most significant contact made in human history.
First is three part series on the Spanish Conquest of the Americas. Below is a collection of short accounts by Spanish explorers, starting with Columbus.

The video below were acquired and used according to Fair Use laws.
The above videos are linked through You Tube under Fair Use laws.
Proudly powered by Weebly