To An Evening Thought 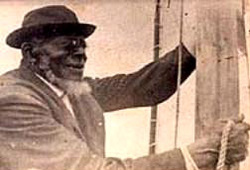 Jupiter Hammon was born on October 17, 1711 on Lloyd Neck. Jupiter's father, Obadiah, was a slave belonging to Henry Lloyd and his wife, Rebecca. From the beginning Jupiter was close to the Lloyd family. He lived in the Manor house with the family, and went to school with the Lloyd children. This closeness is further evidenced by the fact that he is referred to as "brother Jupiter" in later correspondence between the Lloyd sons and their father.
Jupiter worked alongside Henry in Henry's business, and he was often sent to New York City to negotiate trade deals. Henry credited Jupiter with being an astute negotiator, as well as being scrupulously honest. Henry's reliance on him indicates that Jupiter's education went far beyond the basics of reading, writing and arithmetic.
It is clear from his writings that Jupiter Hammon was also a deeply religious man. His first published poem, which appeared in 1761, was entitled "An Evening Prayer", and it trumpeted Jupiter's belief in God and the Bible. When published the credits read: Composed by Jupiter Hammon, a Negro belonging to Mr. Lloyd of Queen's Village, on Long Island, the 25th of December, 1760.
Henry Lloyd died in 1763, and Jupiter went to live with Henry's son, Joseph. Joseph Lloyd was a patriot during the Revolutionary War, and when the British captured New York and confiscated his land he fled to Connecticut, taking Jupiter with him. When the war ended they returned to the Manor, where Jupiter continued to write poetry and prose.
Jupiter went on to become a leader in the African American community. In 1787 he delivered a speech to the African Society of New York City entitled "An Address to the Negroes in the State of New York". In the speech he empathized with their disappointment at not having been emancipated by the new American government, but he cautioned them that it was extremely difficult for the lower classes to earn a living, and they should content themselves with obeying the will of God.
Jupiter Hammon's death was unrecorded, but historians place it somewhere around 1806. He spent his final years living with John Nelson Lloyd, a great-grandson of Henry. He was buried on Lloyd land, in an unmarked grave [No evidence can be found that Hammon was ever freed. He was born, lived, and died a slave.  (GT) ].

Back to Readings
Proudly powered by Weebly