Download Selected Poems
Oliver Wendell Holmes, Sr. , M.D., (1809-1894) was an American physician, poet, novelist and essayist. He was also the father of the famous American jurist and Justice of the United Supreme Court, Oliver Wendell Holmes, Jr. Oliver Wendell Holmes, Sr. was known as the Boston Brahmin. Despite his eventual literary fame, Holmes would take a long hiatus from creative writing. Ralph Waldo Emerson would describe Holmes’s later life creative outpouring in the following way: "like old pear trees which have done nothing for ten years, and at last begin to grow great."  He actually published one of his most famous poems "Old Ironsides" while quite young.

In 1831, Oliver Wendell Holmes, Sr. abandoned his study of law to pursue the study of medicine. He enrolled in the private medical school of Dr. James Jackson. His ultimate goal was to return to Harvard and obtain his M.D. For two years, Holmes also took classes at Harvard. In 1833, Holmes went to Paris to continue his medical training. While in France, he was a dedicated student rarely leaving the hospitals and lecture halls. Shortly after returning to the United States. The year after he received his degree, Oliver Wendell Holmes, Sr. started a private practice in Cambridge, Massachusetts. His practice was never an exceeding financial success.

He turned -- maybe returned --  to writing, both fiction and prose during his middle years.  He and is work is often associated with Atlantic Monthly magazine.  According to some sources, it was his creative efforts that both saved the publication from bankruptcy in 1857 and jump-started it into emergence into one of the top publications in the United States. 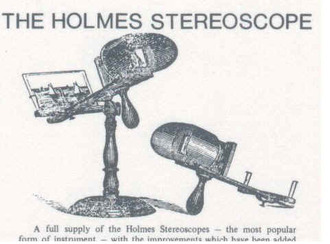 Holmes also invented the stereoscope viewer, a popular 3-D device popular through World War I, but faded with the popularity of motion pictures in the early 1920's.

Oliver Wendell Holmes, Sr. is, obviously, the father of ﻿Oliver Wendell Holmes, Jr﻿., the Civil War veteran and Supreme Court Justice.  According to various sources, during the Civil War, the father and son fell out over a publication by Holmes, Sr. about a battle that the son was wounded in.  The younger Holmes felt his father had made money on his (Jr.) misfortune.  The rift never healed.
To Selected Poems
Proudly powered by Weebly