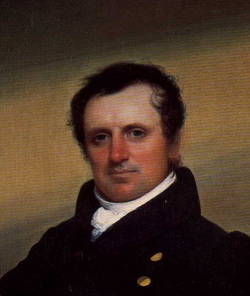 Deeply steeped in literary Romanticism, his works reflect the movement to a high degree.  His best known character, Hawkeye—the Deerslayer—Leatherstocking—Nathaniel—Natty Bumpo, for over a century defined the American version of the Romantic Hero.  In many ways, it still does.

James Fenimore Cooper, (1789-1851) JFC was born James Cooper on September 15, 1789 in Burlington, New Jersey. (The "Fenimore" was legally added only in 1826.) His parents, William Cooper and Elizabeth Fenimore Cooper, were both Quakers, though they drifted into a generalized Protestantism, attending Episcopal and Presbyterian services. JFC was the twelfth of thirteen children, of which only four brothers and two sisters also survived childhood. In 1790 the family moved to Lake Otsego, in upstate New York, where William Cooper had purchased a large tract of land and founded a settlement he called Cooperstown. There he served as a Federalist judge and local squire, with large political and social ambitions. Early experiences in a frontier town gave JFC the background for The Pioneers (1823), among other frontier novels. In 1800 JFC's beloved older sister, Hannah, was killed at 23 in a fall from a horse.  After boarding for schooling in Albany, JFC attended Yale College 1803-1805 but was expelled, apparently for a dangerous prank involving blowing up another student's door. In 1806 he tried to run away to sea, but his father intervened and got him a commission in the United States Navy. He sailed twice to England and served at a frontier outpost on Lake Ontario before being assigned to recruit sailors in New York City, where he met William Branford Shubrick, a career naval officer who became JFC's closest life-long friend. In 1810, JFC met Susan Augusta De Lancey, daughter of a wealthy Westchester family that had been Loyalist during the Revolution. JFC resigned his commission to marry Susan; the wedding was New Year's Day, 1811.

The couple seems to have been extremely well-suited, but their first years together were not completely smooth. Raised to be a sort of country-squire gentleman's son, JFC was ill prepared for a series of financial and personal disasters. His father had died in 1809, leaving a large but heavily contested estate, the value of which was sharply reduced by the Depression following the War of 1812. The subsequent deaths of all his older brothers left JFC a great many debts and family responsibilities, and by 1820, he was casting about for a reliable source of income. In 1819 he invested in a whaleship, The Union, but it did not prove very profitable. His career as a writer began, according to a family story (which we love to retell), almost as whim. The Cooper family had the custom of reading aloud during the long evenings, and they had a standing order with a New York bookseller for the latest novels from England. JFC's daughter, Susan, described the critical moment in her "Small Family Memories," written as an introduction to Correspondence of James Fenimore-Cooper:

A new novel had been brought from England in the last monthly packet; it was, I think, one of Mr. Opie's, or one of that school. My mother was not well; she was lying on the sofa, and he was reading this newly imported novel to her; it must have been very trashy; after a chapter or two he threw it aside, exclaiming, "I could write you a better book than that myself!" Our mother laughed at the idea, as the height of absurdity--he who disliked writing even a letter, that he should write a book! He persisted in his declaration, however, and almost immediately wrote the first pages of a tale, not yet named, the scene laid in England as a matter of course. That tale was published in 1820 as Precaution, a novel of morals and manners which showed the influence of Amelia Opie (whose work JFC in fact very much admired) and Jane Austen as well as Sir Walter Scott. The work and its reception were pleasant enough to encourage JFC to continue, and his next novel, The Spy: A Tale of the Neutral Ground (1821) established him as an exciting new presence on the nascent American literary scene. Here for the first time JFC adapted the historical romance of Sir Walter Scott to an array of themes suggested by the American Revolution: the legitimacy of the rebellion, the failure of the British army, the random violence of paramilitary groups of self-proclaimed patriots, the patriarchal benevolence of Washington as the "father of his country," and the cultural centrality of the outcast spy of the title, Harvey Birch. It was an immediate success and, together with Washington Irving's The Sketch Book (1820) and William Cullen Bryant's Poems (1821), was cited as evidence that American culture had at last begun to produce a worthwhile democratic art. For his next novel, The Pioneers, he drew on his experience growing up in the frontier village of Cooperstown to investigate what it meant to inherit the American history of conflict over possession of the landscape, setting the claims of Native Americans, British Loyalists, American Patriots, roaming hunters, and forest-clearing farmers against each other. If the novel wistfully resolves all these conflicts in the marriage of the children of all the contending parties, it nevertheless succeeds brilliantly as a thoroughly American fiction, not least in its invention of the Leatherstocking, Natty Bumppo, Cooper's essential American hero. More works followed in quick succession--The Pilot (1824), Lionel Lincoln (1825), The Last of the Mohicans (1826), The Prairie (1827)--in a remarkable explosion of creative energy. Other, later, novels similarly (and sometimes as successfully) engaged American history: The Wept of Wish-ton-Wish (1829) was set in Connecticut in the period of King Philip's War; the "Littlepage Trilogy" (Satanstoe, The Chainbearer, and The Redskins, 1845-46) chronicled events of the Anti-Rent Wars in New York (1839-1846) virtually as they occurred. At the height of his popularity as a novelist, he took his family to Europe, and during his seven-year stay, he wrote a fascinating assessment of his native land, Notions of the Americans (1829), and gathered the materials for four travel books. He also alienated his American audience in a way that he never really understood, and when he returned to America in 1833, he entered into the controversies legal actions that would color the remainder of his life. A Letter to His Countrymen (1834) was a bitter attack on American cultural provincialism. In 1836 he retreated to Cooperstown and plunged into a series of lawsuits designed to force his townspeople and a widening circle of Whig editors to respect the sanctity of private property and truth in journalism. The American Democrat (1838), intended as a textbook for high school students, lectured Americans on their political and social responsibilities. JFC was also a keen observer of the political and cultural life of his nation, an accomplished controversialist and a fine naval historian. His studies of naval history included The History of the Navy of the United States of America (1839), The Cruise of the Somers (1844), and Lives of Distinguished American Naval Officers (1846).

By the time of his death JFC had developed an international reputation as America's "national novelist" and was probably more successful and respected abroad than at home. Certainly for many years the large majority of his income, which had been sharply curtailed by the Depression of 1837, was from international sales. But both at home and abroad JFC was best known for the mythic sweep and power of his five Leatherstocking novels (The Pioneers, 1823, The Last of the Mohicans, 1826, The Prairie, 1827, The Pathfinder, 1840, and The Deerslayer, 1841). The Leatherstocking series represents, in D. H. Lawrence's words, "a decrescendo of reality, and a crescendo of beauty," but all his novels engaged historical themes and helped to form the popular sense of American history and romantic historiography in the nineteenth century.

The weaknesses of JFC's fiction are famous--and are all most people know about it. James Russell Lowell, in his "A Fable for Critics" (1849), called attention to JFC's undemocratic class-consciousness and to the limitations of his female characters:

And the women he draws from one model don't vary, all sappy as maples and flat as a prairie. Mark Twain hilariously skewered the excesses of Cooper's romanticism in "Fenimore Cooper's Literary Offenses" (1895). Moreover, all his fictions reflect JFC's didactic concern to educate his audience in the requirements of democracy, and he could be oppressively schoolmasterish. But his characters (including women) are often more richly developed than is usually recognized and compose a remarkable gallery of American types. The novels also constitute a record of American life and society and at their best present a richness, depth, and complexity that was unsurpassed in American fiction before the works of Hawthorne and Melville.

Weaknesses:
Plots seem to overly reliant upon coincidence
Many characters are perceived to be flat and unmotivated.
Passion is implied, not overt
Excessively wordy
Dialect and dialogue is inconsistent
History is modified for plot structure convenience [this is the nature of historical fiction and is simply poetic license -- GT]
Cooper’s lack of first hand experience of the frontier weakens ‘authority’ of setting
Imprecise vocabulary

Strengths:
Emphasis upon individual freedoms
Patriotic, not nationalistic or jingoist
Highly inventive
Original plots
Created legends and myths of the sea and frontier
Established reputation (in Europe) of American writers as world-class
American settings and stories equal to European
His versions of the frontier experience became part and parcel of  American myth and past
Invented new genres of novel forms

Click on the Button Below to link to James Fenimore Cooper Society for a selected list of Cooper's works: