The Captivity of Mary Rowlandson is a captivating account of the King Phillips War. An early 'Captive' theme. 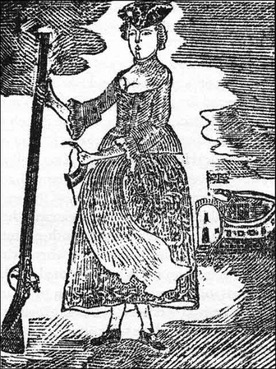 Woodcut from her book.
Mary Rowlandson,
The Narrative of the Captivity and the Restoration
of Mrs. Mary Rowlandson (1682)
[Excerpts]

On the tenth of February 1675, came the Indians with great numbers upon Lancaster: their first coming was about sunrising; hearing the noise of some guns, we looked out; several houses were burning, and the smoke ascending to heaven. There were five persons taken in one house; the father, and the mother and a sucking child, they knocked on the head; the other two they took and carried away alive. There were two others, who being out of their garrison upon some occasion were set upon; one was knocked on the head, the other escaped; another there was who running along was shot and wounded, and fell down; he begged of them his life, promising them money (as they told me) but they would not hearken to him but knocked him in head, and stripped him naked, and split open his bowels. Another, seeing many of the Indians about his barn, ventured and went out, but was quickly shot down. There were three others belonging to the same garrison who were killed; the Indians getting up upon the roof of the barn, had advantage to shoot down upon them over their fortification. Thus these murderous wretches went on, burning, and destroying before them.


At length they came and beset our own house, and quickly it was the dolefulest day that ever mine eyes saw. . . . But to return: the Indians laid hold of us, pulling me one way, and the children another, and said, "Come go along with us"; I told them they would kill me: they answered, if I were willing to go along with them, they would not hurt me.

I had often before this said that if the Indians should come, I should choose rather to be killed by them than taken alive, but when it came to the trial my mind changed; their glittering weapons so daunted my spirit, that I chose rather to go along with those (as I may say) ravenous beasts, than that moment to end my days; and that I may the better declare what happened to me during that grievous captivity, I shall particularly speak of the several removes we had up and down the wilderness.

The occasion (as I thought) of their moving at this time was the English army, it being near and following them. For they went as if they had gone for their lives, for some considerable way, and then they made a stop, and chose some of their stoutest men, and sent them back to hold the English army in play whilst the rest escaped. And then, like Jehu, they marched on furiously, with their old and with their young: some carried their old decrepit mothers, some carried one, and some another. Four of them carried a great Indian upon a bier; but going through a thick wood with him, they were hindered, and could make no haste, whereupon they took him upon their backs, and carried him, one at a time, till they came to Banquaug river. Upon a Friday, a little after noon, we came to this river. When all the company was come up, and were gathered together, I thought to count the number of them, but they were so many, and being somewhat in motion, it was beyond my skill. In this travel, because of my wound, I was somewhat favored in my load; I carried only my knitting work and two quarts of parched meal. Being very faint I asked my mistress to give me one spoonful of the meal, but she would not give me a taste. They quickly fell to cutting dry trees, to make rafts to carry them over the river: and soon my turn came to go over. By the advantage of some brush which they had laid upon the raft to sit upon, I did not wet my foot (which many of themselves at the other end were mid-leg deep) which cannot but be acknowledged as a favor of God to my weakened body, it being a very cold time. I was not before acquainted with such kind of doings or dangers. "When thou passeth through the waters I will be with thee, and through the rivers they shall not overflow thee" (Isaiah 43.2). A certain number of us got over the river that night, but it was the night after the Sabbath before all the company was got over. On the Saturday they boiled an old horse's leg which they had got, and so we drank of the broth, as soon as they thought it was ready, and when it was almost all gone, they filled it up again. . . .

On Monday (as I said) they set their wigwams on fire and went away. It was a cold morning, and before us there was a great brook with ice on it; some waded through it, up to the knees and higher, but others went till they came to a beaver dam, and I amongst them, where through the good providence of God, I did not wet my foot. I went along that day mourning and lamenting, leaving farther my own country, and traveling into a vast and howling wilderness, and I understood something of Lot's wife's temptation, when she looked back. We came that day to a great swamp, by the side of which we took up our lodging that night. When I came to the brow of the hill, that looked toward the swamp, I thought we had been come to a great Indian town (though there were none but our own company). The Indians were as thick as the trees: it seemed as if there had been a thousand hatchets going at once. If one looked before one there was nothing but Indians, and behind one, nothing but Indians, and so on either hand, I myself in the midst, and no Christian soul near me, and yet how hath the Lord preserved me in safety? Oh the experience that I have had of the goodness of God, to me and mine!

My master had three squaws, living sometimes with one, and sometimes with another one, this old squaw, at whose wigwam I was, and with whom my master had been those three weeks. Another was Wattimore [Weetamoo] with whom I had lived and served all this while. A severe and proud dame she was, bestowing every day in dressing herself neat as much time as any of the gentry of the land: powdering her hair, and painting her face, going with necklaces, with jewels in her ears, and bracelets upon her hands. When she had dressed herself, her work was to make girdles of wampum and beads. The third squaw was a younger one, by whom he had two papooses. By the time I was refreshed by the old squaw, with whom my master was, Weetamoo's maid came to call me home, at which I fell aweeping. Then the old squaw told me, to encourage me, that if I wanted victuals, I should come to her, and that I should lie there in her wigwam. Then I went with the maid, and quickly came again and lodged there. The squaw laid a mat under me, and a good rug over me; the first time I had any such kindness showed me. I understood that Weetamoo thought that if she should let me go and serve with the old squaw, she would be in danger to lose not only my service, but the redemption pay also.

… But to return again to my going home, where we may see a remarkable change of providence. At first they were all against it, except my husband would come for me, but afterwards they assented to it, and seemed much to rejoice in it; some asked me to send them some bread, others some tobacco, others shaking me by the hand, offering me a hood and scarfe to ride in; not one moving hand or tongue against it. Thus hath the Lord answered my poor desire, and the many earnest requests of others put up unto God for me. In my travels an Indian came to me and told me, if I were willing, he and his squaw would run away, and go home along with me. I told him no: I was not willing to run away, but desired to wait God's time, that I might go home quietly, and without fear.

Before I knew what affliction meant, I was ready sometimes to wish for it. When I lived in prosperity, having the comforts of the world about me, my relations by me, my heart cheerful, and taking little care for anything, and yet seeing many, whom I preferred before myself, under many trials and afflictions, in sickness, weakness, poverty, losses, crosses, and cares of the world, I should be sometimes jealous least I should have my portion in this life, and that Scripture would come to my mind, "For whom the Lord loveth he chasteneth, and scourgeth every Son whom he receiveth" (Hebrews 12.6). But now I see the Lord had His time to scourge and chasten me. The portion of some is to have their afflictions by drops, now one drop and then another; but the dregs of the cup, the wine of astonishment, like a sweeping rain that leaveth no food, did the Lord prepare to be my portion. . . . If trouble from smaller matters begin to arise in me, I have something at hand to check myself with, and say, why am I troubled? It was but the other day that if I had had the world, I would have given it for my freedom, or to have been a servant to a Christian. I have learned to look beyond present and smaller troubles, and to be quieted under them. As Moses said, "Stand still and see the salvation of the Lord" (Exodus 14.13).