WW2 combat reporter was the most popular journalist since Mark Twain. He's best known for covering the average combat soldier's in war. 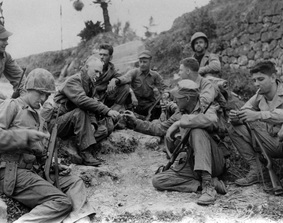 Ernie Pyle talking to soldiers on Okinawa
NORTHERN TUNISIA, April 22, 1943 – I was away from the front lines for a while this spring, living with other troops, and considerable fighting took place while I was gone. When I got ready to return to my old friends at the front I wondered if I would sense any change in them.
I did, and definitely.
The most vivid change is the casual and workshop manner in which they now talk about killing. They have made the psychological transition from the normal belief that taking human life is sinful, over to a new professional outlook where killing is a craft. To them now there is nothing morally wrong about killing. In fact it is an admirable thing.
I think I am so impressed by this new attitude because it hasn’t been necessary for me to make this change along with them. As a noncombatant, my own life is in danger only by occasional chance or circumstance. Consequently I need not think of killing in personal terms, and killing to me is still murder.
Even after a winter of living with wholesale death and vile destruction, it is only spasmodically that I seem capable of realizing how real and how awful this war is. My emotions seem dead and crusty when presented with the tangibles of war. I find I can look on rows of fresh graves without a lump in my throat. Somehow I can look on mutilated bodies without flinching or feeling deeply.
It is only when I sit alone away from it all, or lie at night in my bedroll recreating with closed eyes what I have seen, thinking and thinking and thinking, that at last the enormity of all these newly dead strikes like a living nightmare. And there are times when I feel that I can’t stand it and will have to leave.
*
But to the fighting soldier that phase of the war is behind. It was left behind after his first battle. His blood is up. He is fighting for his life, and killing now for him is as much a profession as writing is for me.
He wants to kill individually or in vast numbers. He wants to see the Germans overrun, mangled, butchered in the Tunisian trap. He speaks excitedly of seeing great heaps of dead, of our bombers sinking whole shiploads of fleeing men, of Germans by the thousands dying miserably in a final Tunisian holocaust of his own creation.
In this one respect the front-line soldier differs from all the rest of us. All the rest of us – you and me and even the thousands of soldiers behind the lines in Africa – we want terribly yet only academically for the war to get over. The front-line soldier wants it to be got over by the physical process of his destroying enough Germans to end it. He is truly at war. The rest of us, no matter how hard we work, are not.
*
Say what you will, nothing can make a complete soldier except battle experience.
In the semifinals of this campaign – the cleaning out of central Tunisia – we had large units in battle for the first time. Frankly, they didn’t all excel. Their own commanders admit it, and admirably they don’t try to alibi. The British had to help us out a few times, but neither American nor British commanders are worried about that, for there was no lack of bravery. There was only lack of experience. They all know we will do better next time.
The 1st Infantry Division [the 18th Infantry Regiment seems to have been his favorite unit] is an example of what our American units can be after they have gone through the mill of experience. Those boys did themselves proud in the semifinals. Everybody speaks about it. Our casualties included few taken prisoners. All the other casualties were wounded or died fighting.
"They never gave an inch," a general says. "They died right in their foxholes."
I heard of a high British officer who went over this battlefield just after the action was over. American boys were still lying dead in their foxholes, their rifles still grasped in firing position in their dead hands. And the veteran English soldier remarked time and again, in a sort of hushed eulogy spoken only to himself:
"Brave men. Brave men."